In December 2019, TSLAC conducted its third Texas Public Library Speed Test, which provided a snapshot of public library Internet speeds across Texas. As we had done in 2016 and 2017, we provided an online network speed test tool for public libraries throughout Texas to test the Internet speed at each of their locations on a wired public access computer. The results (download and upload speed in Megabits per second, or Mbps) were automatically recorded for TSLAC to compile. For the 2019 test, 67% of accredited public libraries in Texas participated.  Network speeds from 494 locations were collected, representing 356 main libraries.

The Federal Communications Commission (FCC) outlined broadband targets for libraries and schools participating in the E-rate program in the recent E-rate Modernization Order. The Order adopted the following targets recommended by ALA (American Library Association):

In a separate action, the FCC recommended a minimum speed of 25 Mbps per household in 2015.

At the conclusion of the Texas Public Library Speed Test, TSLAC cross-referenced the collected data to the FCC’s broadband targets based on respondents’ population size.

30% of Texas public libraries (152 of 494 respondents) that reported results met the targets set by the FCC and ALA. This is a significant increase from 2016 and 2017 tests, when this percentage was a mere 6%. 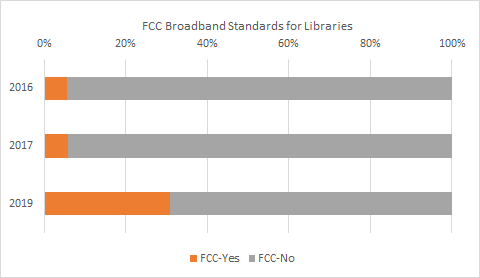 TSLAC’s efforts the last few years to promote high speed Internet and E-rate discounts to public libraries, as well as its successful Libraries Connecting Texas (LCT) program, have had a noticeable impact. But we still have a ways to go. The test results indicate that as much as 70% of Texas public libraries are below national broadband standards for libraries. In addition, 23% of reporting Texas public libraries did not meet the FCC’s minimum definition of broadband for individual households (25 Mbps). The 116 libraries that did not meet this minimum standard serve over 4 million Texans.  Public libraries providing patron computers and Wi-Fi access face greater demands than household networks, requiring faster speeds for patrons to efficiently access distance learning, e-government information, and employment opportunities.

Thank you to the public libraries for participating in TSLAC’s public library speed tests. We plan to conduct more in the future to measure impact and help us determine the current statewide needs for broadband. Collecting this data on regular basis benefits the entire Texas library community and will help us as we work to ensure that every Texan has the Internet access they need.

1 thought on “The Results are in! – 2019 TSLAC Texas Public Library Speed Test”

This site uses Akismet to reduce spam. Learn how your comment data is processed.